So I’ve been moving in to hardware hacking rather than software. I’ve been working in IT software for 8 years now, so something new is fun! Plus if you get hardware wrong you definitely know about it.

First thing I noticed was lighting adequate for software work is useless for tiny hardware work, so I set about building a custom lamp for it.

So, I started with a cheap clip-on desk lamp, and with some components from eBay and a LED pattern laser cut by Ponoko I set to work (pics in full post)

I decided to make the lamp have three colours, white, red, and UV. The latter two are for working with UV sensitive paints for PCB work, and white for general work. I later added a ‘warm white’ as well, as I got some in a bag of LEDs and wanted to use them.

I also added dimming, as I’d found a neat 555-based clockless PWM circuit. This didn’t really work out though, as the dimming wasn’t great due to how that circuit works and probably my component selection.

So we started with this, a simple lamp with two holes drilled in with my cheap fake dremel: 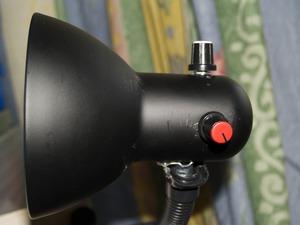 Then there was a wait while I got the LED mounting laser cut, and then a test fit with some LEDs tacked in to it: 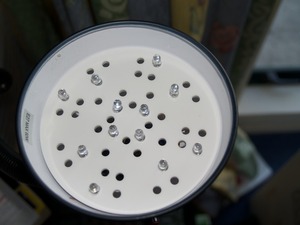 Most of the rest is gluing the LEDs in place using my trusty hot glue gun, and soldering the LED chains together, here’s a shot of the back in progress:

Heatshrink applied to all the wires to prevent shorts, as when all the chains are in place there’ll be a few overlaps. Once all that was done it was time to put it all in place! There were a few false starts, and one casualty: 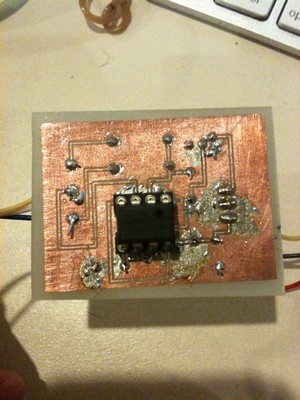 This little board did a pretty decent job of PWM, but it wasn’t very linear. It fell rapidly from full to half, then stayed on half for a while then fall to nothing quickly. I may add a dimmer in the future, but for now it doesn’t seem so useful anyway.

So, how does it work when on? These shots were taken under normal room lighting, but the camera metered that out completely. I could HDR it, but the camera needs charging ;)

The light is shining on a white notebook (go Webstock!) and a stick of hot melt glue, for the last photo. 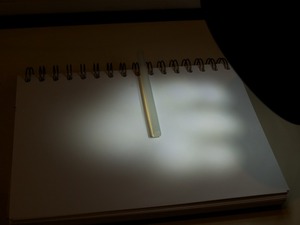 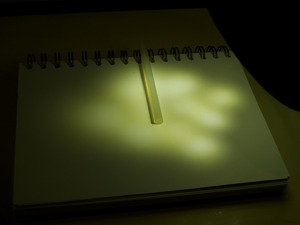 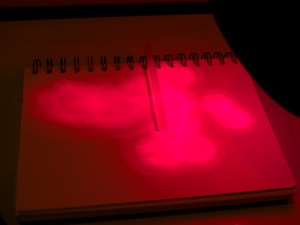 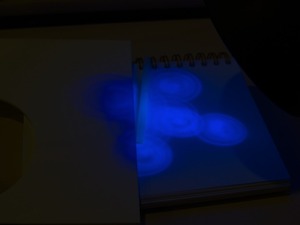 You can’t really see the UV glow in that last shot, but the paper and the glue stick are glowing, but the plastic on the left is just reflecting the purple of the LEDs. LEDs aren’t a great UV source, but it should be enough.

And finally, a shot of the PSU, which is totally overkill for something drawing ~500mA. Yes, that’s a 29A PSU. 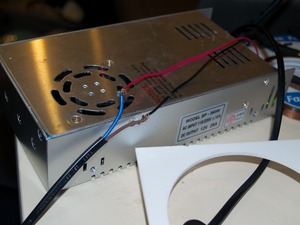 Future plans? None for the lamp. Maybe adding a diffuser to it, tracing paper should work perfectly.